What we learned today... 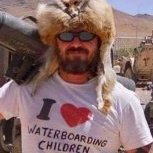 By walksalone,
September 1, 2013 in Husker Football

What I learned from today's game?   Well, after we narrowly avoided the worst upset of Pelini's career, my father pointed me towards a similar game. In 1994, the 'skers opened up against a very weak

Specific excuses for last night's defensive showing aside:   This is now the fourth season where the television announcers have wondered aloud why the Nebraska defense is not making adjustments when