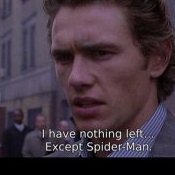 I was on the sidelines at the Olathe North @ Blue Valley semi-final game last night. My brother and I got to hang out and talk to Coach Riley for about an hour. He didn't mention anyone by name, just

Say he committed over the summer. Then say Clemson comes and offers Jan 15th and he flips. Then you would be pissed that the staff couldn't keep him on board. So basically you will be pissed in any