This poll is closed to new votes

He's got the makings of an All-Conference Left Guard, guys. 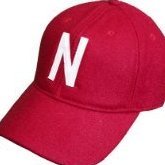 So I'm confused, is Fidone coming in as an outside hitter or a libero?

When the moon hits your eye like a big pizza pie, that's Fidone.