Just an absolute garbage drive.   Took no time off the clock.   Relied on Martinez' arm - the shakiest part of our game today.   Nothing well-schemed, nothing the defense

I don't know, you guys. I think this team is close to a breakthrough.     After all, we only lost by one score! 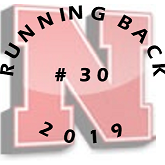 That is one of the single most idiotic pieces of quarterback play I have ever witnessed.