To be clear, it is entirely unacceptable to suggest Kevin Warren quit as commissioner and go off to get another "diversity person position." The implication there is quite obvious. It doesn't matter i 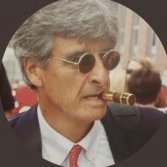 I'd actually like to see the Big 12 live (for at least 4 more years) to make Texas and OU either have to stay for 4 years or pay a huge buyout.

The Alliance to the SEC.